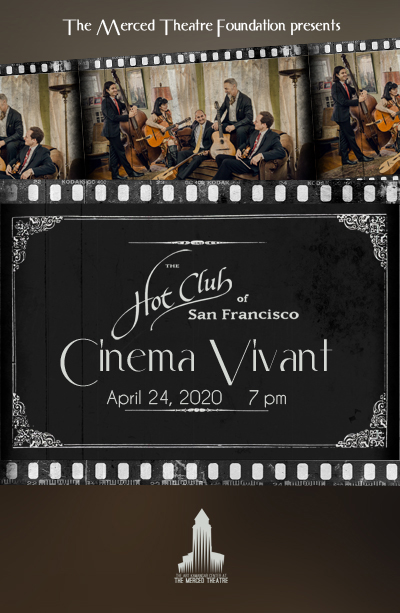 Hot Club of San Francisco is an ensemble of accomplished and versatile musicians who celebrate the music of Django Reinhardt and Stephane Grappelli's pioneering Quintette du Hot Club de France with style and panache. The HCSF borrows the instrumentation of violin, bass, and guitars from the original Hot Club while breathing new life into the music with innovative arrangements of classic tunes and intricate, scorching original compositions. Featuring the amazing violin of twice GRAMMY Award-winning Evan Price, the velvet vocals of Isabelle Fontaine, superb lead guitarist Paul Mehling and a swinging rhythm section, the group never fails to surprise and delight.

Cinema Vivant is a celebration of imagination and innovation. Before World War I, European filmmaker Ladislaw Starewicz pioneered stop-action animation, creating a never-before-seen movie experience. A gifted storyteller who used the new medium of animation to illuminate his fantastic imaginings of the secret lives of ordinary objects, Starewicz has become an obscure cult hero. Two Starewicz films are featured in Cinema Vivant - The Cameraman's Revenge, a charming piece about the marital troubles of beetles and The Mascot, an adventure story about lost toys. On the other side of the Atlantic, American Charley Bowers revolutionized the industry in the 1920's by combining animation with live action. There It Is, a recently rediscovered film by Bowers, is a whimsical comedy about a mysterious occurrence investigated by Scotland Yard.